In October, markets were in real turmoil. The stock market drops that started in the United States reverberated across the world. Stocks dropped in America, Europe, and Asia. In developed and developing markets. The US S&P 500 Total Return index had two periods of six consecutive down-days: October 3rd through October 11th, and October 16th through October 24th. In the first decline, the index came down by 6.69% and 5.45% in the second one. Overall the S&P 500 Total Return index lost 6.84% in October but because of changes in currency rates, the euro decline was 4.30%. Europe’s S&P Europe 350 Total Return index fell by 5.31%. The fund’s benchmark index MSCI ACWI SMID Value Total Return fell by 5.44% in euros. Particularly ugly was the effect of this bloodbath on HCP Quant, which came down by 12.02%, making it the largest one-month decline in the fund’s history.

The crash is hard and obviously feels uncomfortable. At the same time, I’ve welcomed this volatility in markets. I have spoken for a long time about the general level of valuations in markets, which have reached record highs. The “shocks” felt in October will hopefully effect change by continuing. A value investor I highly respect, Joel Greenblatt, wrote in September in the Gotham Funds investor letter about how outperformance in US markets has been provided by loss-making companies. Loss-making companies! It feels like I’m in a time-machine and re-living the year 2000. This trend cannot be based on a solid foundation. Either these companies’ ability to make profits has to go through the roof or markets need to revert to the mean in terms of which types of companies’ share prices are rewarded with appreciation. I believe the latter option is more likely. “This time is different” won’t probably hold true this time either. 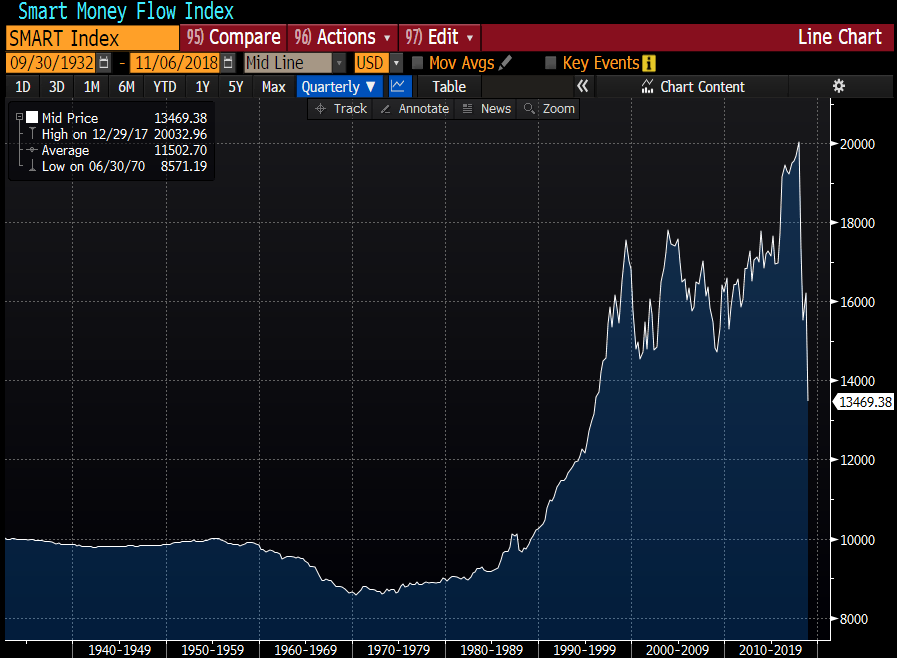 The development of the Smart money flow index. Source: Bloomberg

October’s volatility says a lot about how nervous a situation markets are in. The crash started in the United States started almost by itself. Without particularly bad news or any external reason that people did not already know about. Nonetheless, a wave of selling came out of a clear blue sky. Markets seem to be in a particularly precarious position. It is not particularly encouraging to follow the recent activity of better-informed institutional investors either. The Smart money flow index has dived very strongly. The index is described as follows.

Smart Money Flow Index is calculated by taking the action of the Dow in two time periods: the first 30 minutes and the close. The first 30 minutes represent emotional buying, driven by greed and fear of the crowd based on good and bad news. There is also a lot of buying on market orders and short covering at the opening. Smart money waits until the end and they very often test the market before by shorting heavily just to see how the market reacts. Then they move in the big way. These heavy hitters also have the best possible information available to them and they do have the edge on all the other market participants. To replicate this index, just start at any given day, subtract the price of the Dow at 10 AM from the previous day’s close and add today’s closing price. Whenever the Dow makes a high which is not confirmed by the SMFI there is trouble ahead.

The smart money flow index had a sharp plunge at the of January. According to research by Goldman Sachs, the amount of capital in ETFs, favored by professional investors, also declined around the same time. American markets seem to be at this moment mostly supported by retail investors. ETFs favored by them have swollen as sophisticated investors have been withdrawing funds from the stock market. This could be an ominous sign. No wonder then that the tiniest catalyst can cause strong price swings in this flammable situation.

Even though the situation looks worrying I would like to remind you that predicting markets is very difficult if not impossible. Many pieces of research have shown how timing investments by buying and selling fails more often than it succeeds. Typically, an investor buys when prices have already fallen and buys when the prices are rising strongly, thus falling behind market returns. It is best to accept volatility as a permanent part of stock investing and keep going steadily without being disturbed by what occurs in the market.

I wrote in my previous investor letter about a Chinese company HCP Quant owns that was the target of a buyout offer and whose trading was suspended at the time of writing. As a result, the buyout offer was cancelled and trading resumed. After this, the buying party bought more shares outside the market at the already cancelled offer price (which is higher than the current price) so that the ownership share has risen from 76.82% to 81.48%. Let’s say that it ain’t over till the fat lady sings. When it comes to this particular show, it is still too early for the curtain call.

“Wall Street makes its money on activity. You make your money on inactivity.”
Warren Buffett