If May was challenging, June was more favorable in markets. HCP Quant rose by +4.04% in June. The benchmark index MSCI ACWI SMID Value Total Return’s return was left slightly behind at +3.60%. Other markets performed as follows in June: the S&P 500 Total Return up by 5.19% (large US companies), the S&P Europe 350 Total Return up by 4.40% (Europe’s large companies) and the Shenzhen Stock Exchange Small & Medium Enterprises up by 2.50% (small and mid-sized Chinese companies). All returns in euros.

Drama, speed, and dangerous situations were fed as expected by the meeting between Donald Trump and Xi Jinping at the G20 meeting at the end of June with the markets already having finished the month, as well as by the highest-weighted company in HCP Quant, Bosideng International.

Trump and Xi’s meeting was important to HCP Quant because of its high China weighting. I consider the chances for a tangible result in which the countries agree to continue trade talks quite unlikely, but this time it seemed to be enough for markets. In the week following the meeting, China’s markets opened strongly and in the United States, the S&P 500 Total Return hit an all-time high of 6018.54 points on 3 July.

Knowing Trump, negotiations can take sudden and surprising turns, in which Chinese stocks will undoubtedly move quite sensitively as a result of Trump’s tweeting and the actual development in the future as well. It seems positive that if indications at the G20 meeting of continuing talks got stocks to open strongly on the following trading day (e.g. CSI 300 +2.88% and the Shenzhen Stock Exchange Small & Medium Enterprises +4.04%) then what might the development look like if the talks reach more tangible results?

Another important event in June was the short seller activist Bonitas Research’s presentation of accusations against Bosideng International, the highest-weighted stock in HCP Quant. I immediately began sharing information about the issue and the progress on Twitter. Bosideng had risen to the highest weighting thanks to its excellent performance. Bosideng’s weighting before the attack was 12% and the share price was 2.30 HK$. 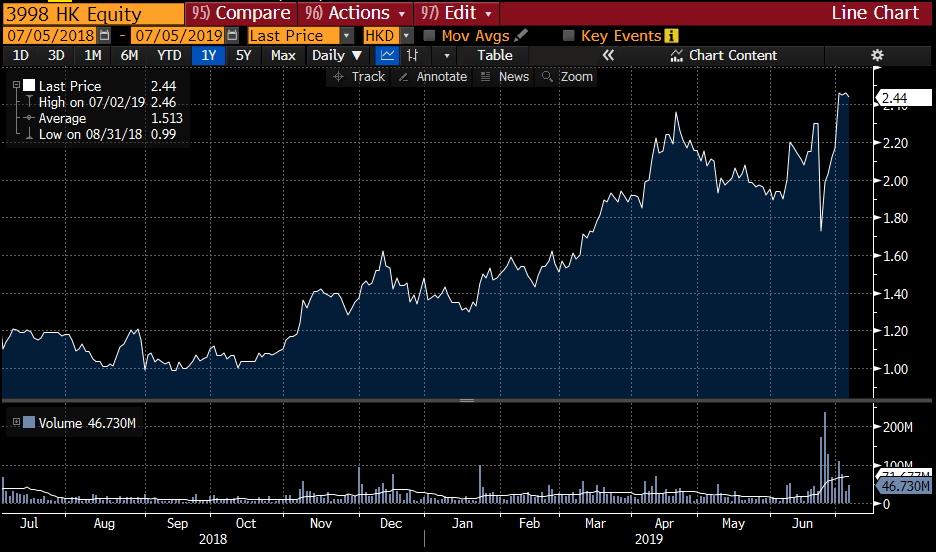 In a report published June 24th, Bonitas Research accused Bosideng  of several obscurities relating to among others accounting and related-party transactions. The company’s share price decreased by 25% to 1.73 HK$, and Bosideng asked the exchange to suspend trading in its stock. Bonitas’s accusations largely rely on differences between the numbers published in the company’s financial statements and the numbers published by its subsidiaries in the Credit Report in China.

Part of HCP Quant’s investing process is estimating the probability of accounting fraud. For this, the fund uses the Beneish M-Score model. Measured by the Beneish B-Score, Bosideng’s risk of accounting fraud was not unusually high. The same thing goes for the Montier C-Score, which also measures the probability of falsification, showed the risk to be low for Bosideng. No model is naturally one hundred percent accurate and trustworthy. Some companies falsifying their accounts pass this filter too. Using these models nevertheless decreases the risk of picking companies for the portfolio whose accounting is misstated.

In my view, the short-seller’s attack is baseless. Bosideng’s response appears credible. According to Bosideng, the differences between numbers in the financial statements and the Chinese Credit Report arise out differences between China Accounting Standards and IFRS. Additionally, the reported time periods differ.

The following day, Bosideng published its outlook for the year. Bonitas’s attack is however not yet over. Bonitas continued its accusations by sending a new report. The company reacted to it quickly with an exchange announcement, in which it considered the report equally baseless and irresponsible speculation as the previous one. Bosideng denied all accusations and promised to provide additional information against the accusations. At this point, the company’s patience towards Bonitas wore out, because Bosideng announced initiating legal proceedings against the attack. Citec began following the firm and gave it a target price of 2.84 HK$. The company’s share price rose by 2% to 2.03 HK$.

China Galaxy International’s report published 24.6. on the most shorted stocks on the Hong Kong exchange 6.-14.6. is an interesting read. Bosideng rose to this list quickly. The number of short positions in the company rose 43% to 175 million shares. It is slightly below of 6% of the company’s free float. I doubt Bonitas is behind these short sales.

Another interesting thing to note about Bonitas’s attack is the timing right before the earnings release. This is unlikely a coincidence. It looks like Bonitas has sold the stock short a week or two before publishing the report, timing its release right before the company’s earnings release. Perhaps this has been an attempt to maximize damage to the company by casting doubt on the new, published numbers. Investors have however come to Bosideng’s side on this issue. The company’s share price has risen to over a five-year high. The share price may have been pushed ahead by the closing of short positions at significant losses.

The HCP Quant fund has sold its position in Bosideng International today Friday. The reason for this is not Bonitas’s accusations but the published results. According to new financial information, Bosideng no longer fulfils the investment criteria and it is replaced by three new firms. Bosideng was in HCP Quant’s portfolio for almost ten months and returned over 140% in appreciation and dividends on top of that. Bosideng has been undoubtedly one of HCP Quant’s best investments in its history. I hope similar success stories will be picked going further too.

Russell Flannery writes in his Forbel article Canada Goose’s China Rival Bosideng Recovers From Bonitas Attack interesting information about the company’s founder Gao Dekang’s background. Gao founded his first clothing business in 1975 in China’s Jiangsun province with 11 other villagers. Gao learned sewing from his father and cycled to work at the beginning of his career. The business grew aided by China’s reforms. Gao built a product and brand step by step. Gao’s story is that of rags to riches. Today, the billionaire no longer has to cycle.