August was a harsh reality check for investors around the world as the trade war between the US and China intensified further. For HCP Quant, the month was a bad one. Especially for Chinese companies, the price drops were significant. During the month, a stop-loss was triggered for three companies, as a result of which they were liquidated. HCP Quant’s value decreased by 10.98% in August. The benchmark index MSCI ACWI SMID Value Total Return in turn dropped by 3.10% in euros. In Europe, the S&P Europe 350 Total Return dropped by 1.37%. The S&P 500 Total Return index performed the best, with a small drop of 0.33%. American markets amazingly continue their excellent performance.

Another thing that spooked investors in August was the inverted yield curve of the US, the biggest driver of the world economy. An inverted yield curve is a situation in which the interest rate over a shorter duration is higher than for a longer period. In a normal, healthy market, a longer maturity’s interest rate is higher than that of a short one. There is more uncertainty related to a longer maturity and to compensate for this risk, investors demand higher returns, i.e. better interest.

In what kind of sitution is the interest rate over a shorter maturity higher than that of a longer one? In such a situation, the short-term risk outweighs the uncertainty over the long term. What could this situation be in the case of government bonds? A recession. 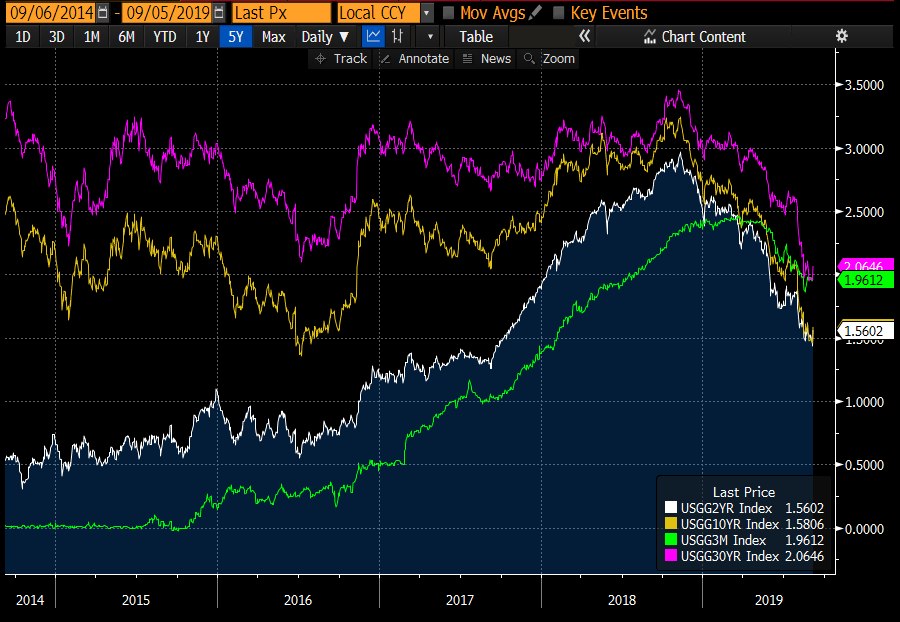 Interest rates for US government debt over the past five years. Source: Bloomberg 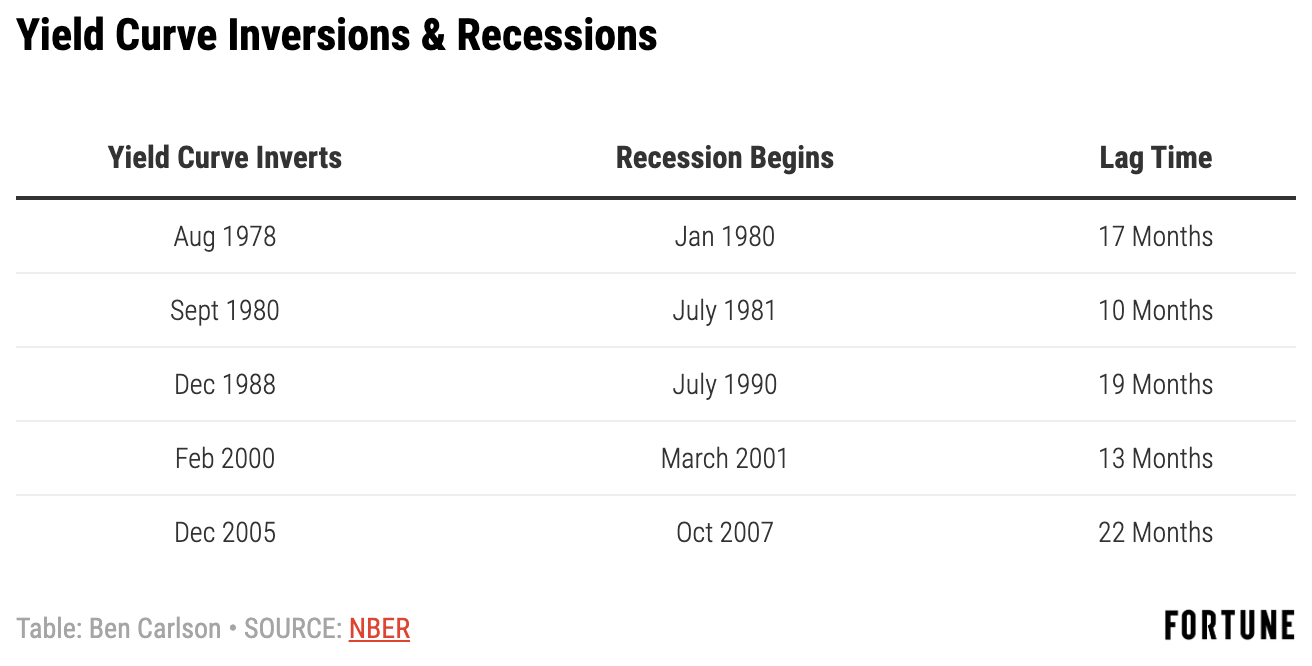 Yield curve inversion and the time lags between inversions and recessions. Source: Fortune

If a recession is knocking on the door, could one think that selling off stocks would be the wise thing to do? Considering that one ought to be able to buy them on the cheap in a recession? The yield curve inversion seems to be a historically good (even though not an precise) prediction tool for recessions. It is however not useful for timing the market.

Eugene Fama ja Kenneth French published a paper at the end of July called Inverted Yield Curves and Expected Stock Returns which studies this question. Not only for the US market but also for the world market and the world ex US. In the paper, Fama and French try investing strategies that gradually move out of stocks to one-month US Treasury bills (an alternative for cash) as the yield curve inverts and remains inverted. Such a portfolio’s returns they compared with stock market returns over one, two, three, and five years. They also tested combinations with yield curves of a different length. All in all 72 combinations were produced. In 67 cases of 72 a buy-and-hold portfolio beat the strategy that moved from stocks to T-bills as the yield curve inverted. 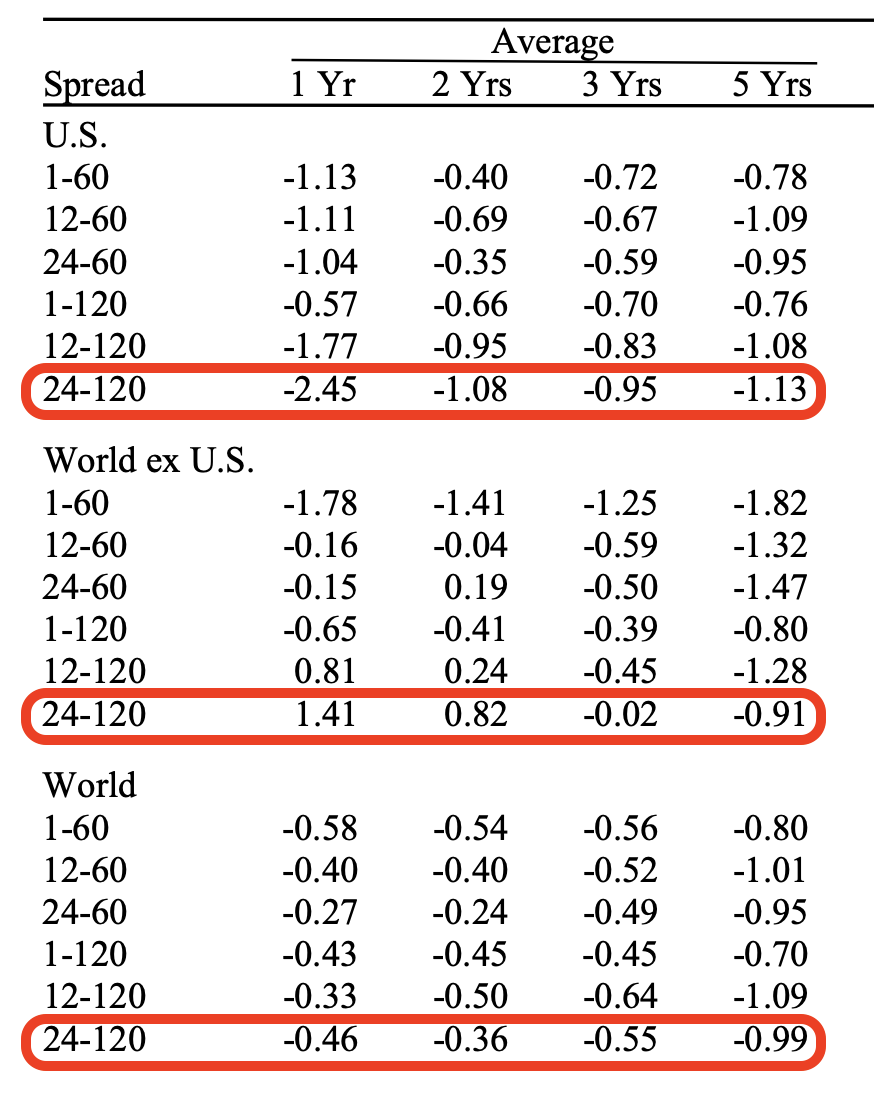 The monthly outperformance of an investing strategy making use of yield curve inversion over different holding periods.. Source: Fama & French

Above is the most relevant table from Fama and French’s paper. It is somewhat difficult to read, so I will explain it in simple language. The table has three portfolios: US at the top, the world ex US in the middle, and world including US at the bottom. The years in the top row indicate holding periods of these portfolios. The spread on the left indicates which yield curves are in question. The “24-120” I have marked with red are the two-year (24 months) and ten-year (120 months) inverted yield curve strategies. The out- and underperformance are indicated on the monthly level. For example in the United States, the strategy that moved to T-bills from stocks when the two-year interest rate was higher than the ten-year interest year lost to overall stock-market returns by 1.08 bps with a two-year holding period.

Fama and French are unequivocal in their conclusion about the uselessness of timing stock markets using yield curve inversion: “We find no evidence that yield curve inversions can help investors avoid poor stock returns. Relative to the returns on the three passive stock market portfolios, all 24 active U.S. and World strategies and 19 of 24 World ex U.S. strategies reduce the average realized return for 1975-2018. The longest forecast period is five years. With the diversification of 11 or 12 countries and 60 months after each inversion, almost all the expected five-year premiums for the active World and World ex U.S. strategies are reliably negative.”

Michael Burry shot to world fame as a result of the book and film “The Big Short.” Burry saw the formation of a bubble in US residential real estate and related subprime problems years before others and correctly predicted that the bubble would burst in 2007. He positioned himself to profit from a fall in the residential real estate market and profited when the markets collapsed. After this, burry closed down his fund and lived quietly for several years. Now he has found a new attractive opportunity about which he told in an interview with Bloomberg. Oh, what is it? Small-cap value stocks.

It wouldn’t hurt if he was right this time as well.

Our funds are open to subscriptions all of September. You can subscribe electronically by clicking the button below. Remember that the subscription sum must be visible in our account on Monday September 30th at 4 p.m. at the latest, so it is good to do the bank transfer the week before.

“If you don’t risk looking foolish, you’ll never do anything special.”
Ethan Hawke