January began on a positive note in the stock market, but it concluded completely differently as the coronavirus scared people across the globe. HCP Quant lost 5.87% of its value in January and the benchmark index MSCI ACWI SMID Value Total Return lost 2.46% in euros. The S&P 500 Total Return index seems to be independent of the real world and rose 1.28% in euros. Europe’s S&P Europe 350 Total Return index in turn decreased by 1.26%. 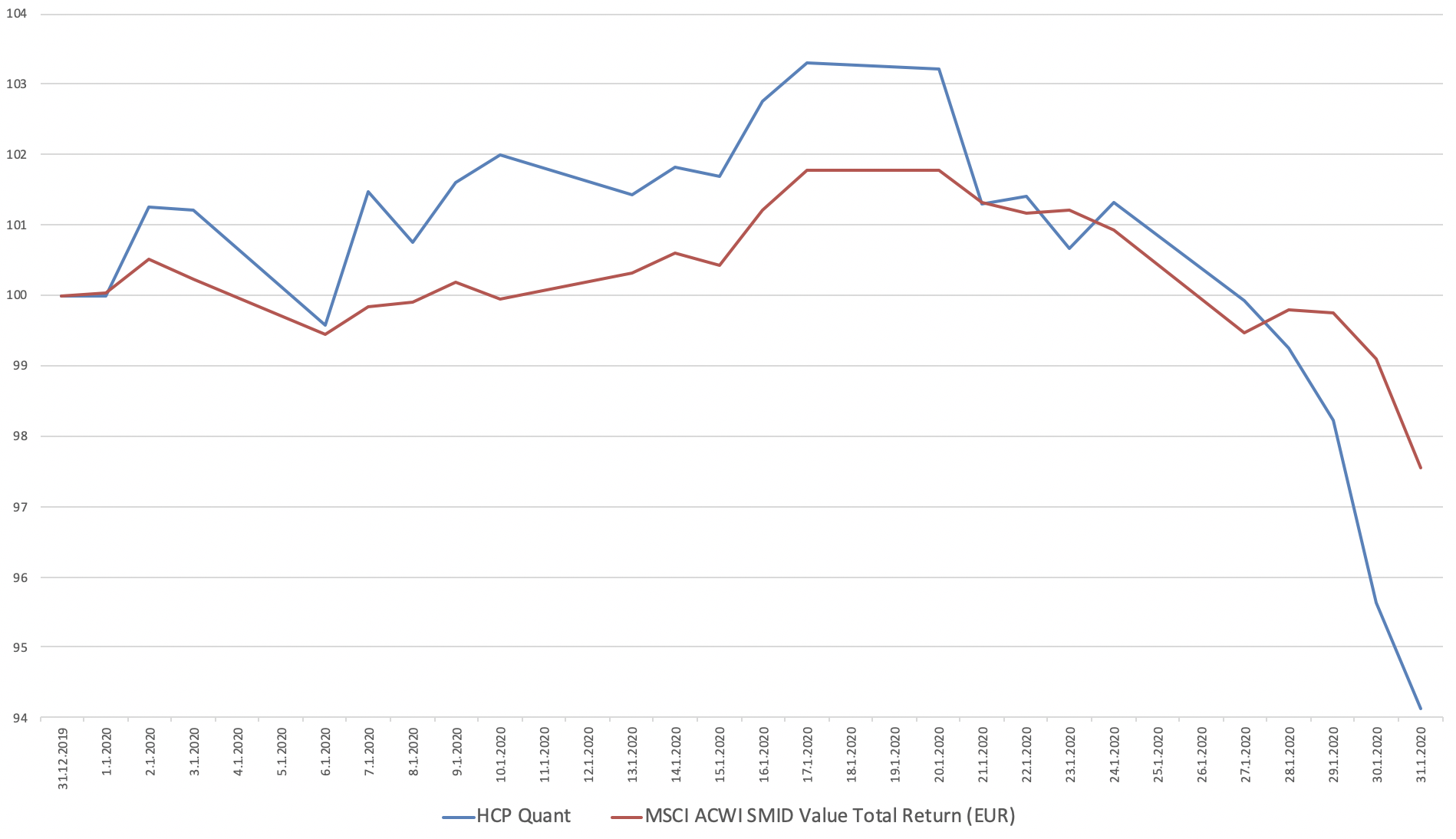 HCP Quant and its benchmark index in January 2020.

HCP Quant developed favorably before worries about the coronavirus arose. United States’ trade truce with China gave some tailwinds, as did the traditional small-cap January rally in the market. HCP Quant outperformed its benchmark until bad news about the virus began spreading like wildfire. I wonder if it is the irony of fate or something else that Chinese stocks keep getting hammered time after time.

The coronavirus spreading from Wuhan in China closed the bourse for a longer period than usually. The market closed to celebrate Chinese New Year on January 23rd but did not open again until February 3rd. Before opening, the People’s Bank of China marched to the rescue by reducing interest rates, increasing liquidity, and setting trading restrictions. Despite these measures, for example China’s CSI 300 index lost 9.45% in euros compared with its previous close and the Shenzhen Small & Medium Enterprises index lost 10.18%. Without the state’s measures, the situation would have been even more desperate.

Now in February, the situation shows signs of calming, and stock prices have indeed risen moderately.

In January, we found out that one of HCP Quant’s investments is in a special situation. Premier Oil PLC announced on January 7th about restructuring its debt. This made the stock price shoot up by over 16%. The gain’s background is in an unusual short squeeze situation. Asia Research & Capital Management (ARCM) is one of the company’s biggest short-sellers. What makes the situation interesting is that they also own Premier Oil’s debt. That is not all. They have been very quiet about having a large short position in the company. ARCM as a creditor opposes the debt restructuring, which strongly indicates that their interest is primarily pushing the company’s stock price down.

On January 16th, Premier Oil announced that they have their creditors’ support as well as a court’s acceptance for the restructuring. Outraged by this, ARCM created a website, arcm-premieroilscheme. After this, worries about the coronavirus spread to the market, as a consequence of which oil prices fell down strongly. Premier Oil’s stock price followed the fall. The stock price has fallen to a level below that of the time of the announcement on January 7th. ARCM tries to put obstacles in the company’s way as fast as it can. If the oil price recovers and ARCM is the underdog, there could be another short squeeze. The world crisis helps ARCM’s goals right now. The world seems to be stormier than usual. An investor should keep his head cool and not overreact. If recent events make you feel uncomfortable in the stomach, it is a sign of too high a level of risk exposure. Then decreasing risk is justified. If not, it is better to focus on one’s investing and stay away from unnecessary flittering.

“There is danger in everything we do.”
Laura Huxley